Over the course of the year, students in this class had opportunities to develop and share their mathematical thinking and strategies in response to different problems. 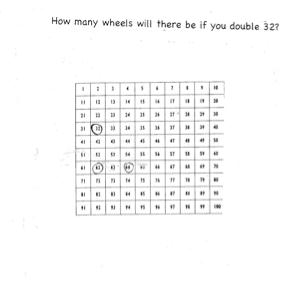 One student used a hundreds chart to solve an addition problem and shared his strategy with the class. The next day, a second student used this strategy to solve a more difficult problem. He had to create a way to address the problem that his addition problem resulted in a sum larger than 100.  He counted on by tens and recorded the numbers as he went until he reached the final answer.

This student built on the ideas of his classmates over time and added a new idea of his own about how to solve a problem without using a hundreds chart.

I can get new ideas or build on or combine other people’s ideas to create new things within the constraints of a form, a problem, or materials.

I can get new ideas to create new things or solve straightforward problems. My ideas are fun, entertaining, or useful to me and my peers, and I have a sense of accomplishment. I can use my imagination to get new ideas of my own, or build on other’s ideas, or combine other people’s ideas in new ways. I can usually make my ideas work within the constraints of a given form, problem, or materials if I keep playing with them.