Students in a class decided to participate in a Model UN debate. They vote to debate gun control in the United States as they have been shocked and horrified at the gun incidents and gun-related fatality statistics in the United States, especially school shootings.

As this issue does not involve different countries,the committee chosen was the American Civil Liberties Union (ACLU) rather than the United Nations, and delegates represented the different states rather than countries. Students representing the honorable dais stressed the importance of collaboration and conversation with regards to socially-charged topics such as the one at hand. The delegates (i.e. students representing individual American states) motioned to discuss topics such as gun-free zones, police brutality, school shootings, raising the legal age, and hunting.

After an intense two-day debate, the delegates began drafting their resolution papers. However, none of the three resolution papers reached a simple majority and, therefore, none were passed. In an official MUN debate, the committee would have to begin the debate all over again, but this was not pursued in the classroom. 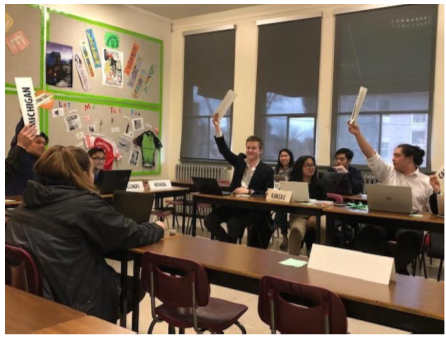 This student work sample is from the student delegate representing Minnesota. They also completed a self-assessment after the debate.

The students enjoyed role modeling the UN debating process and developed research, negotiation, and collaboration skills. It was clear that the more in-depth background research they did, the better they debated. However, students struggled to represent perspectives they did not personally agree with.

The students wished they had come up with a resolution that passed but lacked some of the necessary negotiation strategies for this to occur. For example, the different alliance “blocks” could have aligned themselves more to one another to bring about a resolution paper.

I can evaluate and use well-chosen evidence to develop interpretations; identify alternatives, perspectives, and implications; and make judgments. I can examine and adjust my thinking.

I can ask questions and offer judgments, conclusions, and interpretations supported by evidence I or others have gathered. I am flexible and open-minded; I can explain more than one perspective and consider implications. I can gather, select, evaluate, and synthesize information. I consider alternative approaches and make strategic choices. I take risks and recognize that I may not be immediately successful. I examine my thinking, seek feedback, reassess my work, and adjust.  I represent my learning and my goals and connect these with my previous experiences. I accept constructive feedback and use it to move forward.

I communicate, creating an intentional impact, in well-constructed forms that are effective in terms of my audience and purpose.

I contribute purposefully to discussions and conversations. I synthesize, deepen and transform my own and others’ thinking. I can weave multiple messages into my communications; I understand that my audience will use their own knowledge and experiences in making meaning. I show understanding and control of the forms and technologies I use; I can assess audience response and draw on a repertoire of strategies to increase my intended impact. I can acquire, critically analyse, and integrate well-chosen information from a range of sources.